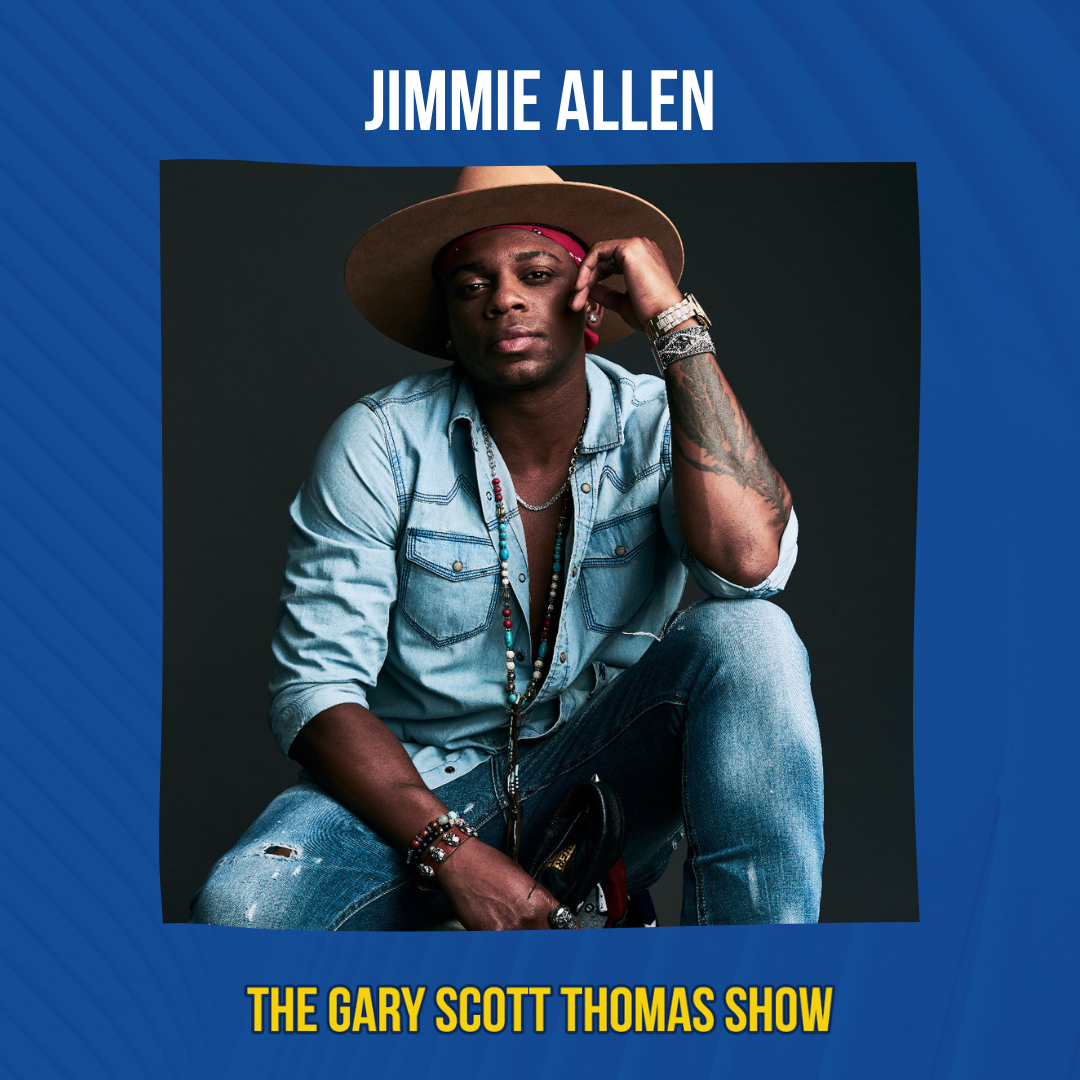 By heather@garyscottthomas.comMarch 17, 2021Music
No Comments

“I’ve seen people have sex in the audience during the show.” – @jimmieallen

“Music has a way to soften hearts. You know? It’s the one thing that brings people together.” – @jimmieallen

“I was the only black punter in the state of Delaware, so that made me cool, they loved it, I was more famous than the quarterback.” – @jimmieallen

“You can’t tell me if Jay Z was a cashier at Walmart he could’ve pulled Beyonce…ain’t no way in the world.” – @jimmieallen

For breakthrough country artist Jimmie Allen, a simple phrase sums up his view on life and music: Never give up.

He’s poured out his soul at Music City’s famous Bluebird Cafe, wrote a song that was featured in a Super Bowl commercial, and appeared in a Diet Coke ad with superstar Taylor Swift. But the October 2018 release of his debut album MercuryLane –named in tribute to the street he grew up on and the origin of his incredible journey–on BBR Music Group’s Stoney Creek Records, a lifetime of never giving up brought him full circle.“ I didn’t quit, I never will,” he says. “Stuff ain’t easy, and you shouldn’t quit either. There’s a big difference between busting your ass, and sitting on it.”

For Allen, musical dreams and a love of true-to-themselves artists like Alan Jackson, Aaron Tippin, Montgomery Gentry, and Jason Aldean brought him all the way to Nashville –and eventually around the world for an Armed Forces Entertainment tour of Japan. But it was actually a nightmare that turned this promising singer into the artist he is today.

After a series of bad breaks, Allen was forced to live in his car, too proud to ask for a bailout. For months he worked multiple jobs and finally saved enough for an apartment, but hit then another snag –country music wasn’t ready for him. “People were just trying to help,” he says now. “But they wanted me to change my sound and told me I had to lose my boots. The turning point came when I stopped listening, and finally, let my music be a natural reflection of who I am.”

Since then, Allen has been following his own compass, and it’s leading somewhere special. “I don’t regret it,” he explains about his trials. “I think each thing you do adds a layer, whether it’s a layer of toughness, perseverance, motivation, or just a layer of wisdom. At the end of the day, you come back to what you know, and what’s embedded in you. ”What’s embedded in Allen is a powerful, soulful sense of groove – “If my body don’t move in the first four seconds, it ain’t for me,” he says –a love of deep messages and a knack for razor-sharp hooks.

Those driving forces form the bedrock of Mercury Lane, a cutting-edge mix of country, rock, R&B, and pop produced by Ash Bowers and Eric Torres; the project received critical acclaim, with Rolling Stone raving that it “challenges the narrowly defined model of what constitutes a next big thing in country music” and The New York Times hailing it one of 2018’s strongest, calling it a “conventional country album, filled with songs about the small details.”Ironically, it’s the same sound he had when he first arrived in Nashville, but now things are different.

“Underdogs” and “Best Shot” reveal Allen’s true story of laying it all on the line, while “Back Home to You,” “Back of Your Mind,” and “Blue Jean Baby” find the singer-songwriter reflecting on his journey to the spotlight –with all the love he left behind and romantic hopes included. Allen’s hard-won dreams are finally a reality, but he knows he can’t rest now. Wrapped around his wrist is a homemade bracelet given to him by a fan. It bears another simple phrase –“explore” –and now it serves as a daily reminder.“

To me, it means to explore every part of your heart that desires to do something,” he says. “No matter what it is. Take a chance and never stop until you figure out where you’re supposed to be.” For Allen, those chances have paid off. He has made history as the first Black artist to launch a career with two consecutive No. 1 hits on country radio, with “Best Shot” claiming the No. 1 spot for three weeks and his second single “Make Me Want To” hitting the top spot in March 2020.

My dad and grandmom were two completely different people, but both played a huge part in my life,” Allen says of the motivation for the project. “Since they died, I have been wanting to leave trails of their legacies throughout my music. ”Each artist on the project has touched the life of Allen, his grandmother, and father in some way, allowing their legacies to weave seamlesslythroughoutBettie James. The result is a musical composition of love, heartbreak, perseverance, hope, and faith.

Jimmie’s current single “Freedom Was A Highway” pairs Allen with his friend and Country music superstar Paisley for a breezy, windows down track that joins Allen’s distinctively breezy grooves with a Paisley signature guitar solo. The two trade lyrics inspired by Allen’s upbringing in Delaware and reminisce over the nostalgia of more carefree, youthful days where simpler moments like innocent childhood crushes reigned supreme.

Bettie James has garnered 120+ million streams since its release, along with critical acclaim for the music, the historic nature of various collaborations, and its subsequent place in country music history. NPR calls the project an “announcement of [Allen’s] arrival” and a “huge step for country” while Billboard hails it “a powerful statement from a developing voice.”

The EP appeared on several “Best of 2020” lists including Billboard, Rolling Stone, and Sounds Like Nashville. Rolling Stone describes “Why Things Happen” –which brings together three generations of Black country artists in Allen, Darius Rucker, and Charley Pride –as “part polemic, part proclamation, and part prayer… opening up space for the artists to bear witness. ”Reflecting on Allen’s wide-ranging musical sensibilities, Music Row notes of the project: “While some artists still in the early sunrise of their careers, with a handful of hits to their credit, would be focused solely on extending their chart successes, it’s clear that Allen’s goals for his music are loftier than mere chart hits and No. 1 parties—he’s striving for music that testifies to his full spectrum of creative abilities.”

On July 13, 2021, Allen will publish his debut picture book, My Voice Is a Trumpet, with Flamingo Books, an imprint of Penguin Young Readers. Illustrated by veteran illustrator Cathy Ann Johnson, the book is a powerful story about speaking up for what you believe in, at any age. In My Voice Is a Trumpet, all voices are as diverse as the characters and heard loud and clear–from voices that roar like a lion to voices small as a bee, all it takes is confidence and a belief in the goodness of others to change the world.“It’s very important to me that kids learn at a young age that they have a voice and that it is powerful. It is up to us as adults to teach them to use their voice to encourage and show love,” Allen says of his first-ever book. “Being a father of two kids, I try to encourage them to be themselves and love everyone around them. I’m hoping this book inspires at least one child and they always remember their voice is a trumpet.”