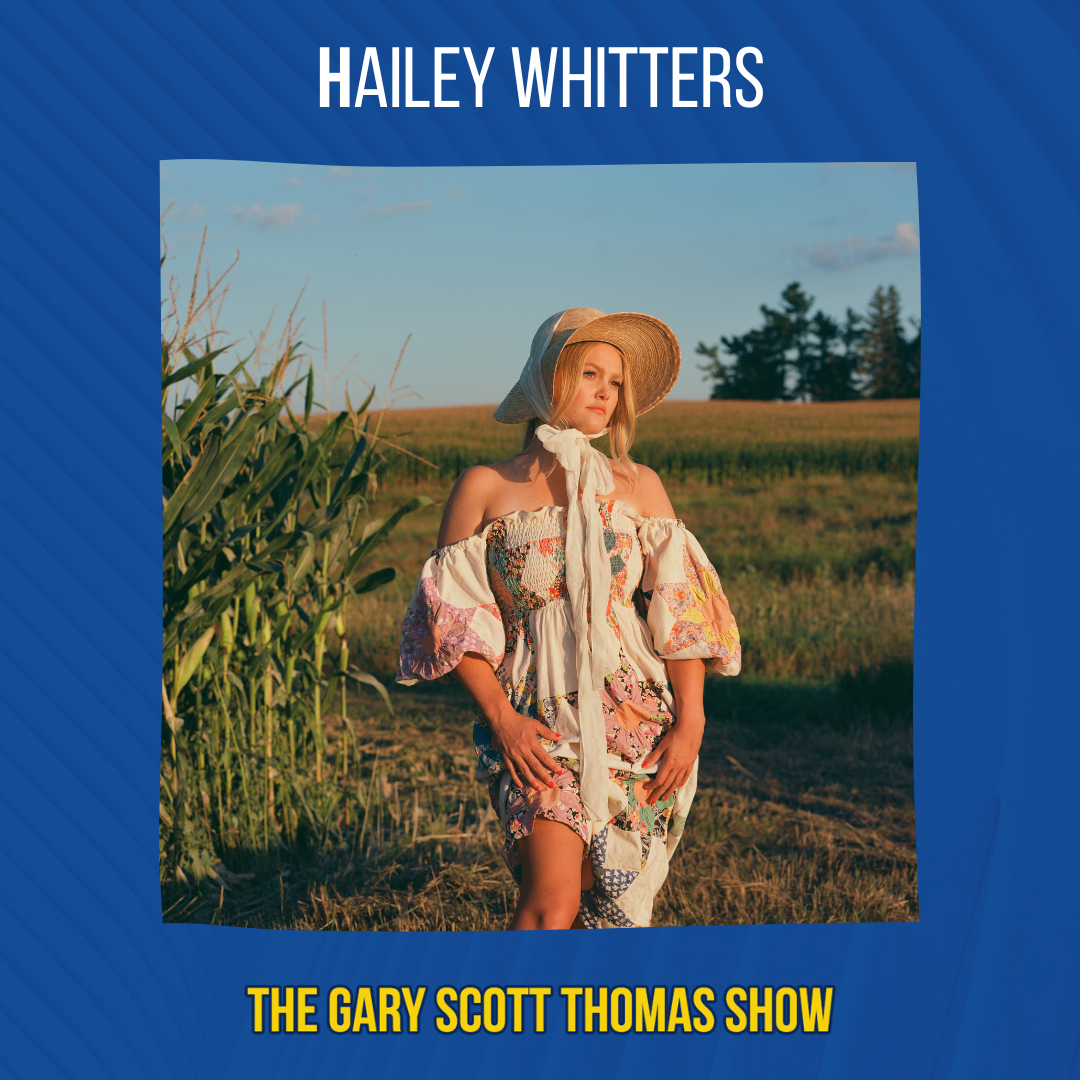 In this week’s episode, Country Music artist Hailey Whitters joined Gary Scott Thomas and shared stories about songwriting sessions, Nashville, and more. You’ll be amazed at the courageous thing she did when she first arrived in Nashville! If you like getting to know more about the artists you love, give this episode a listen.

“It’s a good thing you have your dreams when you’re young. You’re just dumb enough to chase them.” ~Hailey Whitters

“I had no connections to the music business. I had no friends down here. I had no family down here. I would just walk up, introduce yourself and ask for a gig.” ~Hailey Whitters

“I try and look at the positive. It’s not all butterflies and rainbows, but if I can have a few songs in my pocket that make me feel good and make me think of the good things in life, I like to have that. And I like to sing about that and remind other people that there are bad days, but there are some really good ones too.” ~Hailey Whitters

The idea of “home” courses throughout country music. But few songwriters can place you in the center of the town square, on a stool at the corner bar, or in a chair at the kitchen table quite like Hailey Whitters.

On her 2020 breakthrough album The Dream, Hailey wrote about escaping her hometown of Shueyville, Iowa, to pursue stardom in Nashville. It was a fantasy record at first, full of far-off plans, hopes, and dreams. But it soon became Hailey’s reality — she signed a label deal with Big Loud/Songs & Daughters, went on tour with Luke Combs and Midland, and made her first of many appearances on the Grand Ole Opry.

The Dream and its deluxe reissue Living the Dream earned her critical acclaim from media outlets as varied as The Washington Post, Rolling Stone, Garden & Gun, and Stereogum, which ranked it the best country album of the year. Hailey racked up 75 million global artist streams, was named the inaugural Opry NextStage Artist of 2021, and was nominated for Breakthrough Video of the Year at the CMT Music Awards. Remarkably, she also became a Grammy-nominated songwriter for “A Beautiful Noise,” her collaboration with artists like Brandi Carlile, Alicia Keys, and Brandy Clark.

In the midst of that whirlwind, Hailey found herself reconnecting with her Midwestern roots. Shueyville was always in the back of her mind, and the memories she made there — getting her first kiss from a boy who tasted like wintergreen tobacco, racing her friends through the cornfields, eating Sunday supper with her big family — started to shape her writing. Over the past two years, she channeled those memories into her highly anticipated new album, Raised.

Released via Songs & Daughters and Hailey’s own Pigasus Records, Raised is the sound of Hailey Whitters going home.

“It’s been 14 years since I’ve lived in Iowa, but more and more, I’ve been going back there mentally and being pulled to the people and the places that raised me,” she says. “With The Dream, I was starting to turn that corner back home, but this record went straight there. If The Dream were my wings, then Raised is my roots.”

For The Dream, Hailey turned to Jake Gear to produce. For Raised, she joins Gear — her creative partner and fiancé — behind the console as co-producer. Once again, Logan Matheny mixed and engineered. The result is an LP that is rich in folksy turns of phrase, sharp yet inventive in its musicianship, and teeming with unvarnished honesty.

“If you’re listening to The Dream, I think you hear a girl hanging on. She’s had her heart broken, but she’s finding a way to persevere and to keep going,” Hailey says. “And when you listen to Raised, you hear what gave her that strength. This is the place, the people, the work ethic, the values — this is what she was raised on.”

Made up of 17 tracks, Raised is full of expertly crafted country songs — the title track, “Boys Back Home,” “Beer Tastes Better,” and “Middle of America,” featuring American Aquarium — and quirky sonic excursions. The orchestral piece “Ad Astra Per Alas Porci” (Latin for “To the stars on the wings of a pig,” Hailey’s motto) bookends the album. There’s also a gorgeous piano “Interlude” at the record’s midsection and a comedic skit titled “The Grassman” that introduces one of the album’s high points: “Our Grass Is Legal,” a salute to a straight-and-narrow family business that was accustomed to shady phone calls.

“My grandpa had a sod business named Whitters Turf Farm back in the Sixties and Seventies, and he called himself ‘The Grassman.’ Everyone would call him looking to buy pot,” Hailey laughs. “My dad and my uncles all grew up working out in the fields, raising grass with him, and he had the business motto ‘Our Grass Is Legal.’ I thought it was a perfect title for a song.”

Family is a recurring theme throughout Raised. That’s Hailey’s real-life Aunt Cindy who answers the phone in “The Grassman” skit, and it’s her parents’ Iowa cornfield that inspired the track “In a Field Somewhere.”

“That’s my holy place,” Hailey says. “That’s where I go to quiet my head. You can see for miles, and it’s just golden and serene. Back in high school, the cornfield was where I used to go streaking with boys and a case of beer. My dad taught me how to drive in a field. And Jake proposed to me in that same cornfield behind my parents’ house.”

In “Big Family,” she sings about volatile holidays, boisterous road trips, and “bunk beds, matchin’ sheets and sharin’ the bathroom sink.” Fleshed out by wistful fiddle and a twangy Telecaster solo, the song grows into a family chorus sing-along.

“I come from a big Irish-Catholic family. We had more cousins than friends growing up,” Hailey says. “I remember all of us would head over to my grandpa’s after church for Sunday supper, and he’d be sitting on a stool with a shot of whiskey and a Schlitz beer, and everyone would be catching up on the weekly family gossip. That definitely shaped me.”

On the surface, she sings about drinking in “Beer Tastes Better,” co-written with Lori McKenna. But it reveals itself to be an emotional commentary about outgrowing home and trying in vain to recreate that sense of community.

“It’s that moment of walking back into your hometown bar, and you are instantly walking back into the past and the present. It’s a bittersweet feeling to experience: It’s like everything’s changed, but nothing really has,” she says.

Along with standouts like “Ten Year Town” and “Heartland,” The Dream gave Hailey a viral hit with the character study “Janice at the Hotel Bar.” She taps into that sense of personal storytelling on Raised with “Pretty Boy,” co-written with Scooter Carusoe and Tom Douglas. While the guys in “Boys Back Home” taught Hailey how to drink, fight, kiss, and cry, the title character of “Pretty Boy” is a lesson in going against the grain. He’s not the quarterback or the good ol’ boy; just an introspective kid finding his way.

“‘Pretty Boy’ unveils some of the darker sides and shadows of masculinity,” she says. “Where I’ve grown up, boys are supposed to be tough, aren’t supposed to cry. But as I’ve gotten older, I’ve realized that a man’s ability to show emotion, grief, and sadness is a strength. ‘Pretty Boy’ may not be written the same way as ‘Janice at the Hotel Bar,’ but it has that same rich storytelling lyricism.”

At the end of the day, Hailey remains very much that girl next door, ready to jump in the back of a pickup truck in her worn-in blue jeans and head out into the fields. “I’ve never been much of the Hollywood style,” she laughs.

Like Hailey herself, Raised is steeped in the culture of the Midwest. Musically, there are hints of early Alan Jackson, the Chicks, and the king of heartland rock, John Mellencamp. But you needn’t have spent your formative years on a farm for Raised to speak to you.
“Raised is a celebration of the Midwest, but I think it’s a common story no matter where you’re from,” Hailey says. “My experience growing up in the middle of the country is very relatable to a lot of people. We’ve all lived in a similar way — the only thing that’s different is the scenery.”