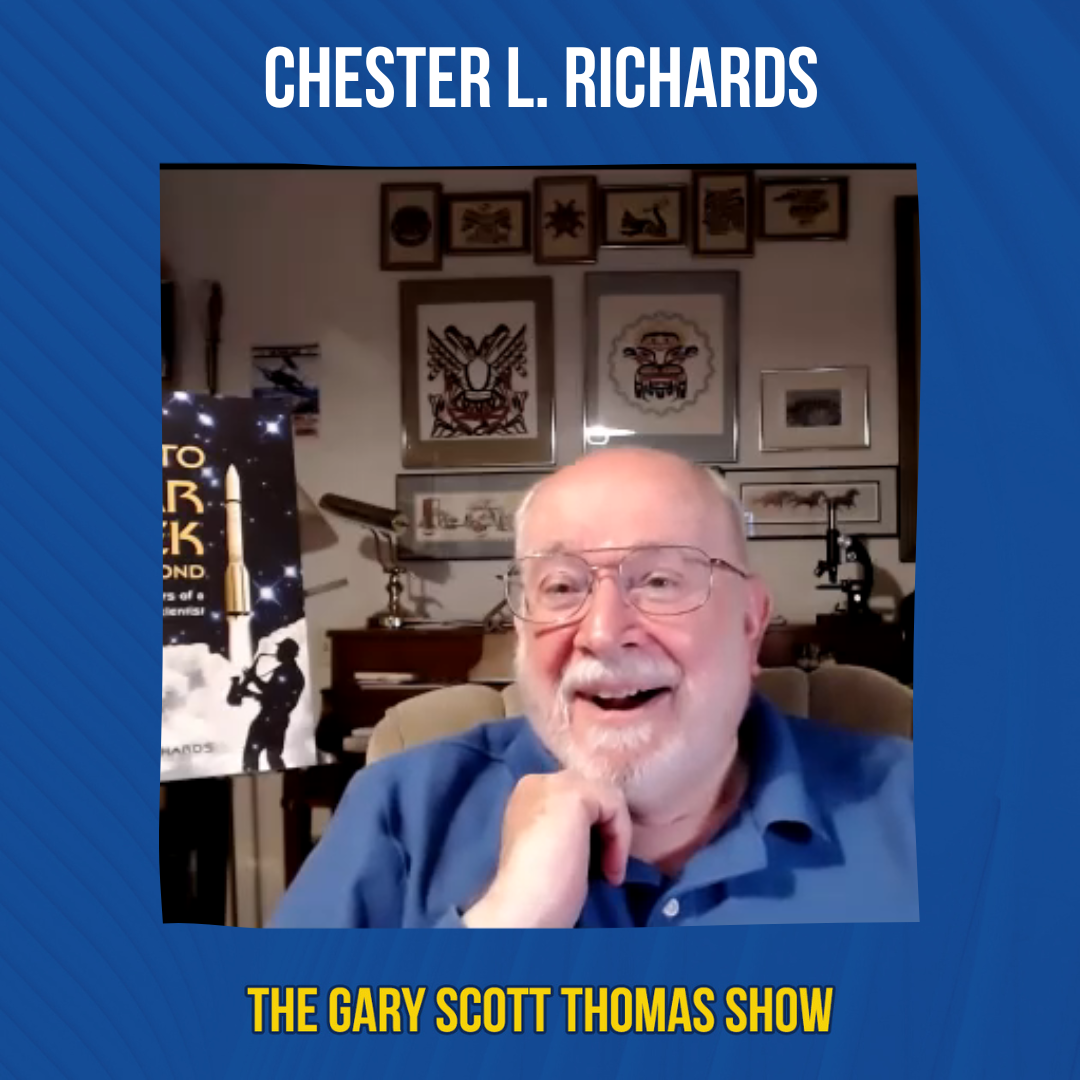 Calling all Star Trek fans! Chester L. Richards, the co-writer of “The Tholian Web” episode of Star Trek, joins in the conversation, and it’s fascinating!! Some of his stories are almost unbelievable like the story about almost being killed by the great potato, the Colorado River, a crocodile, a crazed gunman…

“That’s one of the things I hope comes through in the book. I talk about some very, very interesting people in that book–some in the rocket business and in some of the adventure travels I’ve had over the years.” ~Chester L Richards

“I’ve been privileged to see a couple of [rocket] launches.” ~Chester L Richards

“I had a deal with the local, regional library that I got first dibs on every science fiction book that came into the library.” ~Chester L Richards

“It turns out that there are clusters of insects that get electrified, and they glow in the dark, and a number of UFO sidings have now been attributed to these swarms of insects.” ~Chester L Richards

“I didn’t use to be a fan of Shatner, but I am now I have to tell you he’s a good guy, and he’s a fine actor. He really is a funny, talented, funny actor.” ~Chester L Richards

“When I see work [scripts] that is a little slip shot, I kind of get turned off by it. On the other hand, some of the stuff can be really a lot of fun, and you just say, ‘Well, oh, what the heck? You know, it’s a fantasy, and you go with it.’” ~Chester L Richards

You can sit in your house all day long and not have a very rich life, or you can go out and do things. Yeah, there are some hazards, but the richness you gain as a result more than compensates for the hazard that you experience.” ~Chester L Richards

“The more stories that I wrote, the more comfort I had, and I gradually was able to rebuild my life and get back to some kind of a normal psychological perspective through the process of writing these stories.” ~Chester L Richards

“I felt totally hollow when she [wife] passed away.” ~Chester L Richards

“You don’t have a fully rich life without the darkness.” ~Chester L Richards

Prior to retirement, Chester L. Richards was an Engineering Fellow at Raytheon Space and Airborne Systems Division. At Raytheon, he was Chief Architect for Advanced Concepts and Architectures. Before joining Raytheon, Mr. Richards had an engineering consulting business. His diverse technology career spans half a century.

At the beginning of his professional life as a scientist, Mr. Richards invented and patented the first successful automatic focus sensor using real-time image analysis. It was used in aerial reconnaissance cameras.

During part of his career, Chester L. Richards served as a System Engineering Technical Assistant (SETA) consultant to the U.S. Government. In this role, Mr. Richards developed the modern Space-Based Laser architecture for the Strategic Defense Initiative Organization. He was a member of SDIO’s Mission Analysis Working Group and its Innovative Science and Technology group. As SETA, he helped define the functional architecture of Schriever Space Force Base and wrote the Statement of Work establishing the requirements for the base.

For the Air Force, Chester L. Richards created the definitive high-fidelity sensor model for the DSP satellite series. In addition, he developed high-precision target tracking techniques for the Hover Test Facility at Edwards Air Force Base.

At Raytheon, one of his most important discoveries was the complete quantitative theory of bistatic radar, which previously had been only partially understood. This led to multiple fielded applications.

Other activities include: Co-author of “The Tholian Web” script for the third season of the original Star Trek series.