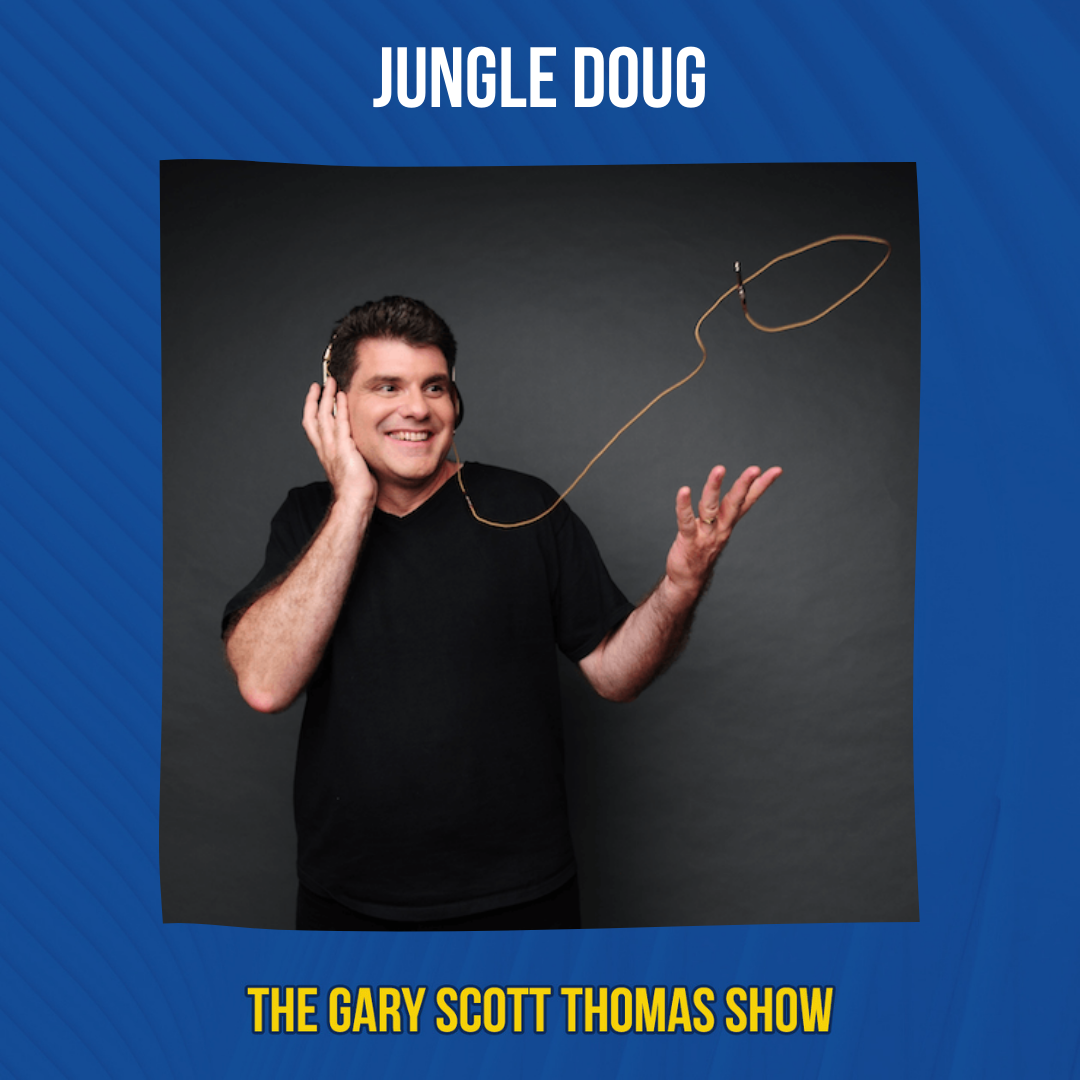 By audience demand, Gary Scott Thomas reunites with his former co-host Jungle Doug! This episode will make you laugh, make you think, and make you feel like you made a new friend.

“When stones get thrown at you, just get out of their firing range.” ~Jungle Doug

“Suicide is tough to talk about, but we need to.” ~Jungle Doug

“Being transparent on the radio is just what we do.” ~Jungle Doug

Doug began his career in 1986 on the radio in the San Francisco Bay Area and started his mobile DJ business in 1988.  In California, Doug worked on over 25 stations, including six years as morning sidekick “Jungle Doug” on 95.3 KRTY Hot Country/San Jose, mid-day personality on the adult contemporary KKIS/Concord, and traffic rapper “Doug EEE Fresh” on the urban KSOL/San Francisco.   In 1998, Doug moved to Tennessee for 3 years as a host on the “Doug & Connie” and “Doug & Karla” morning shows on WAY FM.  In 2001, Doug moved to 94FM The Fish and has been on the air there since the station’s first morning on the air.

Currently, you can hear Doug as the Afternoon Drive Host (3-7 pm) – Prior to that Doug spent six years on the “Doug & Jaci Velasquez – Family Friendly Morning Show” and 9 years on “Doug & Kim”  94FM The Fish is the flagship station for the nationally syndicated “Today’s Christian Music” Network heard on over 80 stations in the US.  Doug is also a member of the Tennessee Wedding and Event Specialists Association and is a multi-year award winner on Wedding Wire. 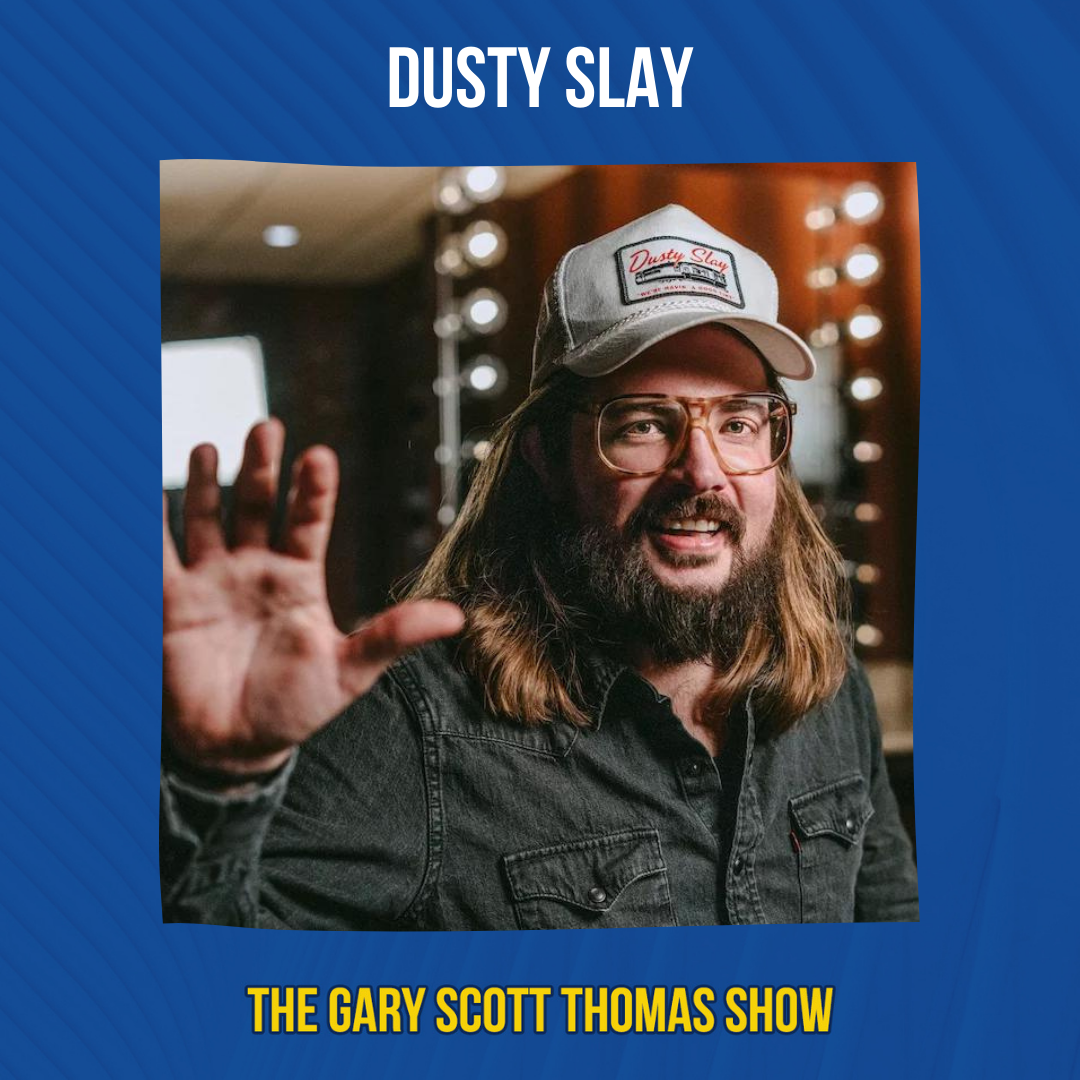 You have to listen to this episode with comedian Dusty Slay. You may remember having seen him on Netflix or The Tonight Show. This episode is the one that makes Gary snort! Also, you’re going to have to rewind the part where Dusty talks about his family tree and convoluted family dynamic just to make sure you heard him correctly. You can make this stuff up!

“When so many things are thrown at you, you just learn to make jokes about it.” ~Dusty Slay

“Laughter is an aphrodisiac.” ~Dusty Slay

“I thought I was hilarious.” ~Dusty Slay

People are dealing with addiction like never before.” ~Dusty Slay

“Life is better for me without alcohol.” ~Dusty Slay

“I love to be underestimated.” ~Dusty Slay

Dusty Slay is a standup comedian appearing on ‘The Standups’, streaming on Netflix for the third season now according to Wikipedia.

He is now featured on the new series called “The Standups” where the comedians are generally less well-known than comics who have stand-alone specials.

Dusty Slay came from a broken family who divorced when he was young. He parted his childhood by spending time between the two of them.

His mom lived in an Alabama trailer park whereas his dad lived on a farm outside of LaFayette.

Dividing his time with both of his parents, he has so many memories he shared on the stage and they are hilarious.

Dusty Slay is 39 years of age as he was born in 1982 on 18 May. He hails from Opelika Alabama and he now resides in Nashville. Tennessee, USA.

He grew up in an Alabama trailer park and he has so many stories of his blackout drunk memories.

The comedian Dusty Slay is happily married to his wife Hannah Hogan for quite some time already. Hanna is also a standup comedian, actress, and writer from Canada.

The couple also started a podcast “We’re Having A Good Time” about their journey on road as a comic. But soon Hanna left the show in March of 2021 and Dusty hosted the show alone for a while. 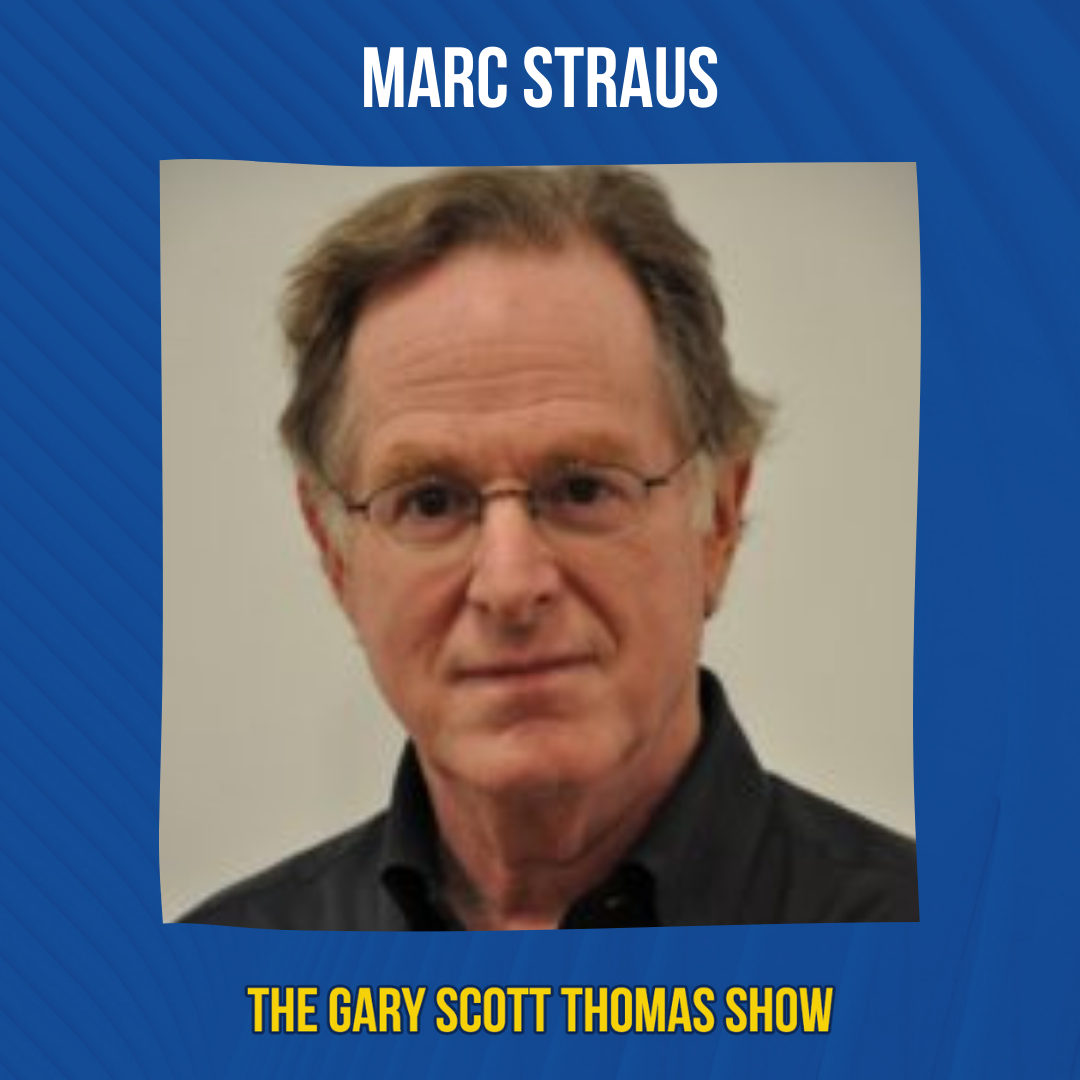 *Trigger Warning: domestic abuse*
This episode with highly accomplished oncologist Marc Straus is jam-packed with astonishing stories that take you by surprise and inspire you to stay in the fight.

“When I had an idea, I just pushed ahead and did it.” ~Marc Straus

“Poetry is a unique way to use language.” ~Marc Straus

“You can’t do the best job without being fully committed.” ~Marc Straus

“I was meant to be a cancer doctor.” ~Marc Straus

“I was in the fight.” ~Marc Straus

“A lot of who I am today is because I fell in love with books.” ~Marc Straus

“I think books in some way saved me.” ~Marc Straus

“I don’t look back. It gets in your way of moving forward.” ~Marc Straus

“You have to be decisive.” ~Marc Straus

“We have a long history of not learning from history.” ~Marc Straus

MARC STRAUS is a poet, writer, medical oncologist, and art collector who lives with his wife, Livia, in Chappaqua, NY. The author of numerous scientific papers and articles on contemporary art, and has published four poetry collections including Not God, staged Off-Broadway. His poems and stories have appeared in Ploughshares, Kenyon Review, and many other literary journals. The Strauses founded Hudson Valley MOCA in Peekskill, NY, and Marc runs the Marc Straus Gallery in New York City. One-Legged Mongoose is his first book of prose. For more information, please visit https://marcjstraus.com/. 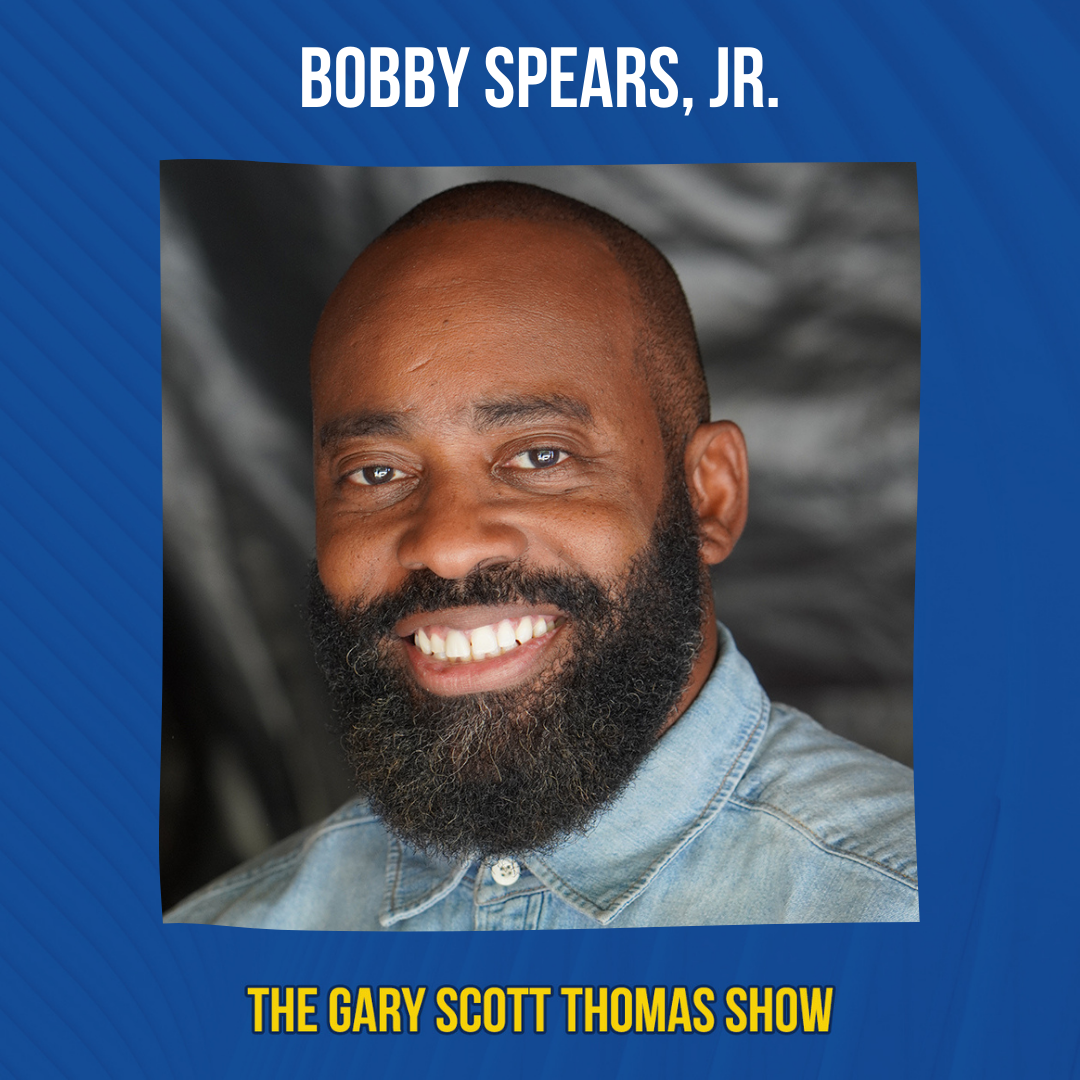 In this dynamic episode, Bobby Spears, Jr. and Gary Scott Thomas have an open and honest conversation about race, politics, raising kids, and more.

Also in this jam-packed episode:

“I’m trying to leave something for my children.” ~Bobby Spears, Jr.

“If you give your children too much, they don’t understand the value of those things.” ~Bobby Spears, Jr.

“There’s a value in rolling your sleeves up.” ~Bobby Spears, Jr.

“When you don’t have a plan B, you throw everything into plan A.” ~Bobby Spears, Jr.

“I’ve never seen a crime happen in front of me.” ~Bobby Spears, Jr.

“People spend more time insulting and tearing down each other than having discussions.” ~Bobby Spears, Jr.

“Politics is supposed to be the art of compromise.” ~Bobby Spears, Jr.

“If you can’t laugh at yourself, you’re brittle.” ~Bobby Spears, Jr.

Bobby Spears, Jr. is a husband, father, and writer. Spears attended Howard University on an Annenberg Scholarship awarded in part to an academic paper he wrote on the importance of changing the ways minorities are viewed and view themselves in the media. After graduating in 1996 with a BA in television and film production, he chose to work in his family business, providing housing and attendant care to the mentally disabled. Over more than 20 years, the Spears family has grown their business into the largest privately-owned personal care provider in Pennsylvania. At their height, the company housed and cared for nearly five hundred disabled clients monthly.

During his career, Mr. Spears provided assistance to nearly ten thousand clients and families, worked with thousands of third-party health care providers, dealt with three state administration changes, and consulted for multiple entrepreneurs opening their own facilities. Spears never gave up his desire to impact the world through media, so at the age of forty-three, he decided to focus on writing and television, and film production. He is supported and motivated to succeed by his wife Adrienne and two children, Zakhari and Zoie.