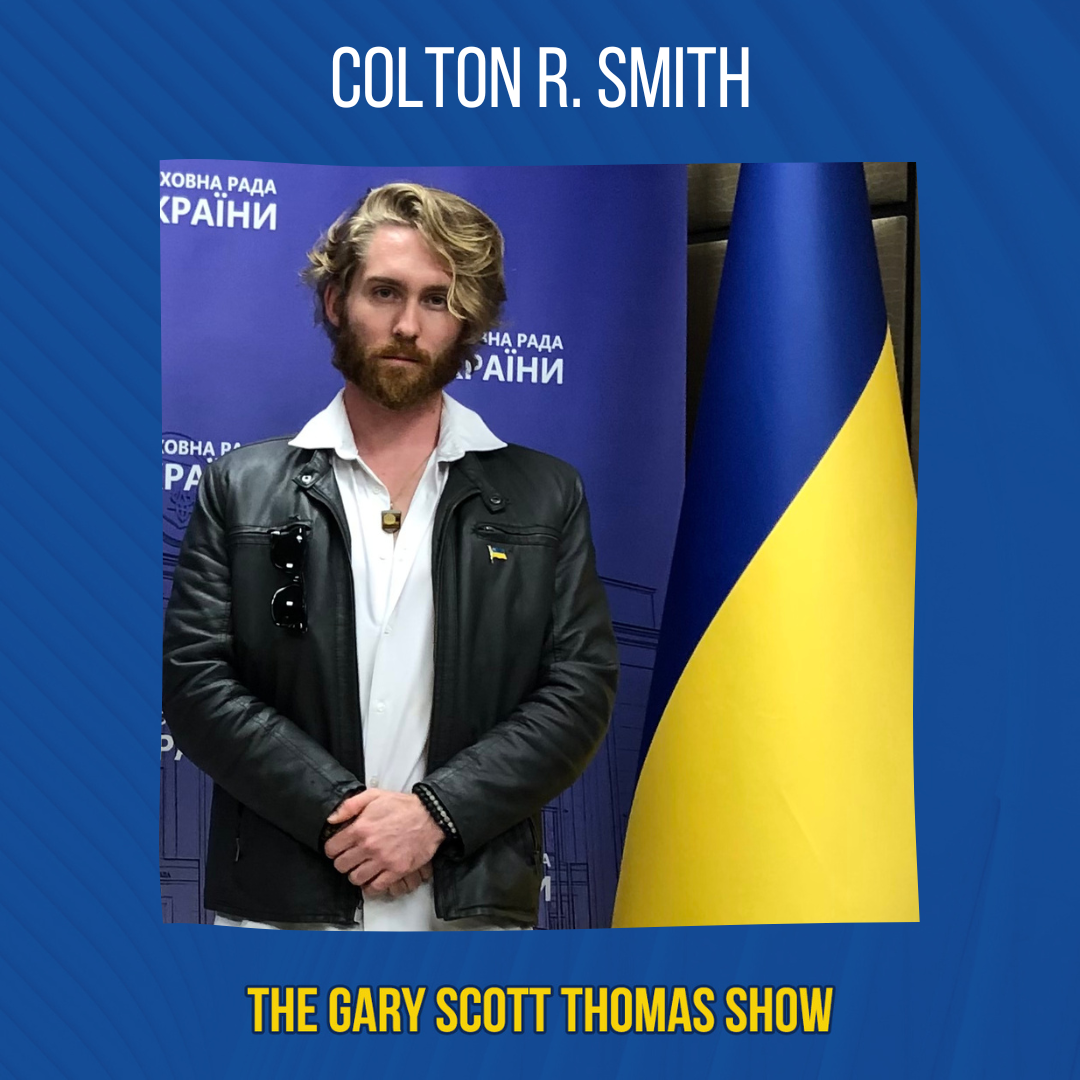 One day he was waiting tables, the next day, he was on his way to aid in the humanitarian crisis in Ukraine. Colton R. Smith joined Gary Scott Thomas for a fascinating conversation where he shared his experience, including the time when he came upon a car that had been riddled with bullets by the Russians even though it had been full of children. If you’ve been following the coverage of the war in Ukraine, listen to this episode to get unfiltered information.

“It just captured my imagination and my interest. And I was like, ‘This is history playing out before our eyes. This is so important.’” ~Colton R. Smith

“It literally just gives me chills talking about it, and I’ve been a part of it for so long now. But at that point, I was just devastated. I was working at a Mexican restaurant in Morgan Hill, and I just couldn’t do my job right…the Russians were starting to surround the capital. This city’s been taken…That city’s been taken…I couldn’t sleep.” ~Colton R. Smith

“I’m a historian, and I realize that the people who change history are no smarter than you or I… It doesn’t matter. Everybody has within them the possibility to be able to tilt the world slightly further away from darkness, mayhem, and chaos and more toward the light.” ~Colton R. Smith

“Every single person has the power to make the world a little bit darker or a little bit brighter.” ~Colton R. Smith

“My moral compass in my conscience and my heart would not allow me to say no. Even if it scared the hell outta me, it didn’t matter.” ~Colton R. Smith

“Only by looking the darkest things dead in the eye can you have a hope to defeat them.” ~Colton R. Smith

“It took me about a full month to really process everything that I experienced while it was over there [Ukraine].” ~Colton R. Smith

“I would get that thousand-yard stare looking off, thinking about everything that I saw, and my friends would snap me out of it.” ~Colton R. Smith

“One of the reasons why I went was in honor of everybody who wished that they could go and couldn’t. And also because I’ve been gifted such an incredible life filled with so much privilege, and it was time to go and give back to my world.” ~Colton R. Smith

“The sad part is, is that we’re at a place right now where we’re seeing donations and interest dry up while this is still raging in an overwhelming way.” ~Colton R. Smith

“Human trafficking has been a brutal reality of this crisis.” ~Colton R. Smith

“Something can be. People can be saved. You can do something to try to help change this terrible situation [human trafficking], rather than just sitting around and shaking your head and saying, ‘That’s sad.’” ~Colton R. Smith

Colton R. Smith is a 25-year-old Californian humanitarian worker who recently returned from serving the humanitarian mission in Poland and Ukraine, where he daily faced the overwhelming crisis created by the Russian Federation’s brutal ongoing invasion of Ukraine. Smith is a graduated UC Santa Cruz European history major who quit his job and dropped everything to travel to Eastern Europe to do everything he could to help in this humanitarian crisis. In eastern Poland near the Ukrainian border, Smith joined a humanitarian aid organization called Help Ukraine Center, where he worked for two months helping to send thousands of tons of humanitarian aid to the war-torn country next door. At Help Ukraine Center, he met numerous incredible people that strengthened both his faith in humanity and his resolve to dedicate himself fully to this crisis. He was then recruited by another organization called Teleport, specializing in humanitarian optimization to help solve the inevitable problems that organizations face when responding to wartime crises. In July 2022, Teleport Organisation sent Colton to Ukraine as part of a delegation of Teleport representatives to meet in Kyiv with members of the Ukrainian government and a number of heroic Ukrainian humanitarian organizations to lay the groundwork for Teleport’s new missions inside Ukraine itself. Under the near-daily blare of air raid sirens, Colton and his team forged new bonds in the Ukrainian capital, with massive potential to make a substantial impact in this intense humanitarian crisis. Now, Colton has returned stateside to fundraise for Teleport, which faces a severe shortage of funding. Without the donation support of concerned members of the public, Teleport will be unable to fulfill its role and carry out its various humanitarian missions in Ukraine. Colton and his incredible team hope that through spreading awareness of the realities on the ground and fundraising, Teleport can continue to work every day to provide the critical support that Ukrainian civilians need to successfully ride out the hell of Putin’s onslaught against them.

Visit Teleport’s website below to learn more about their humanitarian work and make a vital direct contribution to enable that work’s continuation:
www.teleport-organisation.com