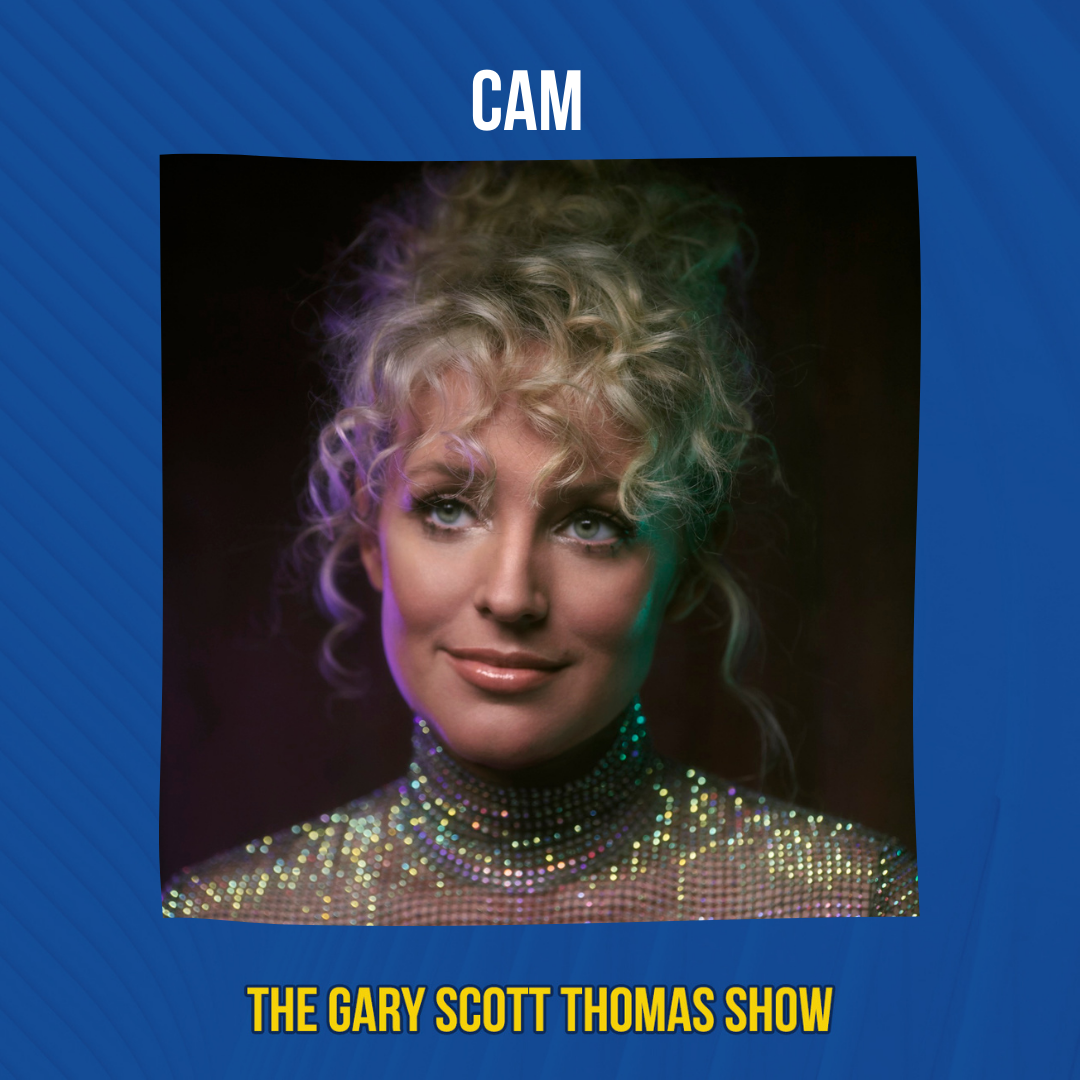 “Nothing’s precious, you can tweak and erase.” – Cam

“You don’t understand like 10 years of failure, you know, until you finally make it.” – Cam

“The idea of an unreliable narrator in a song talking about his heartbreak, it just tickles me.” – Cam

“A lot of the people that I spoke to in the very beginning when we started, you know, diversity movements at the ACMs and stuff; people all wanted it, everyone just had different ideas about how we could get there and when we had arrived.” – Cam

“One second, let me just put a baby on a boob!” Camaron Ochs, or Cam professionally and to her friends, is at home at the start of 2020. The new decade not only brings her re-entry into music with a brand new album of her best ever work, but it welcomes Cam too as a first-time mother having just given birth over the holiday season. Today, mom and daughter are together, as Cam prepares to re-introduce herself to the world. The 36-year-old has an old soul but a young heart and she has always approached her career and her artistry in the way only Cam knows how. Prolific and adored, Cam has had a tremendous start in the industry. She has co-written with Sam Smith for his album (the song also became the soundtrack for an exquisite Apple commercial) and toured with him around North America. She lent her writing voice to Miley Cyrus’ Bangerz album and she opened for Harry Styles at the legendary Ryman in Nashville. Forget genres, there is a deeper through-line at work: individuals in pursuit of earnest self-awareness. And they continue supporting each other as both Smith and Styles have writing credit on Cam’s new album.

This commitment to her own truth has led to some of her proudest moments outside of her music (giving a TED talk, working in both the GRAMMY and ACM Diversity & Inclusion Task Force) and it’s the reason for some of the most difficult moments as well. She took a stand in 2018 and asked to be separated from Sony Nashville, whose operations were not in line with her values. For that reason, it’s been five years since her debut LP which came hot off the tail of Grammy, CMA & ACM nominated hit in ‘Burning House’ (still the best-selling country song by a female solo artist over the past 5 years) and two years since the release of global favorite ‘Diane’ – a modern-day ‘Jolene’.

It was a move that often jeopardizes an artist’s career but the risk paid off. Now working solely with RCA, she bought herself some time, and with it, she refined songs, and her voice strengthened via multiple international tours. She hustled despite the stress of the situation. She didn’t wait for someone to wave a magic wand. “The whole body of work is better for having gone through that crazy shit. That’s life, right?” she says. The album is the one she wanted to make, how she wanted to make it. The songs were written in LA, Nashville and NYC over the past three years. She used the same collaborators in executive producers Tyler Johnson (Harry Styles, Sam Smith) and Grammy winner Jeff Bhasker (Kanye West, Bruno Mars), who she calls her fellow “tinkerers”.

The songs on the resulting LP The Otherside contain that kind of classic familiarity that means you only need to hear them once before they’re rolling around in your head. The lead single ‘Till There’s Nothing Left’ is a sexy power ballad that moves like an uptempo. It’s an unashamed from-the-gut testament to giving your everything to your one true love. “It’s a commitment. It’s saying – I am gonna love you with everything I have, physically, spiritually, I’m so in,” she says.  “Me and my husband will go drive and have a quickie in the back of the car. Why am I embarrassed to sing about that? All these dudes are talking about this in every song,” she says. She thinks back to her grandmother who gave her the sex talk when she was 12-years-old. “She said, ‘Camaron Marvel, sex is like a milkshake: once you’ve had it you’re always gonna want it!’ This song is me owning that. Sex is ours too.”

The Otherside is so titled because it contains songs and stories from the perspective of hindsight, once the dust has settled, and they’re written from Cam’s purest heart pangs. Cam writes openly about her gorgeous relationship with her husband (‘Like A Movie’, ‘Classic’), and she also writes damningly about her own inability to get over lovers past (‘Forgetting You’), and about the messy endings of her friends’ relationships (‘What Goodbye Means’). It’s about falling in love in those back seats, then falling out of it as the same cars drive away from you never to be seen again.

“When you’re going through something it’s hard to see in the moment that you’re transitioning. Then you make it to the other side and you’re like, ‘Holy shit this is who I am now’,” says Cam. She needed to write these songs to process and understand what she had come through and who was standing before her in the mirror at the end of it all. Take ‘Forgetting You’. It’s about remembering someone you once loved and having to face the truth that they’re just a memory. “They’re not the same person anymore,” she says. “You’re holding on to them from a different time.” She wrote ‘What Goodbye Means’ while watching a friend go through a divorce. “He stayed at our house for six weeks. I kept being so surprised by how gently he kept treating his ex and how nicely he was speaking to her after all the pain she was putting him through. He said it was because ‘she might change her mind.’ The rest of us knew that would never happen, but it was completely understandable and such a pure sentiment that he couldn’t see that yet. It was his journey to go through.”

It’s novel to listen to an album with so many love songs while the world burns, but it’s necessary. There’s something about our big optimistic pursuit of romance that keeps us standing still. Cam’s tales are so lovely they inspire hope for anyone who seeks something similar. “It’s literally like I’m in a movie with my husband,” she says of the song ‘Like A Movie’. It was inspired by a conversation she had with her husband after a trip to Walmart. “We’ll go shopping and get high and giggle with each other when I’m not on tour. We were sitting across the table and I asked him: ‘How did you know it was me?’ He was super high, but didn’t miss a beat. He said: ‘Because when I met you it was like a movie.’” Even the number ‘Classic’, written with Jack Antonoff, came from a trip she took with her husband to Argentina in which he found an old pack of Lucky Strikes and bought them. “They don’t make ’em like this any more,” he said, and there was another of Cam’s lyrics.

Musically, the album is not rooted in the sound of country, although the lilt is there. It’s country as a form of expression for truth-telling, for stories about life. The main focus for Cam was that her voice was at the forefront, and in these songs she can elevate her vocal performance and reach new heights acquired from all her touring. As she spends more time making records, her voice is becoming gutsier. It’s no surprise to learn that her inspirational touchstones for the tone of this album are all movie soundtracks from eras gone by, ie, ’90s romantic comedies and dramas. ‘Redwood Tree’ was inspired by the sci-fi movie Arrival, a film about how time isn’t linear. A comforting idea when you fully realize you can’t be in two places at once- you can’t see the world and see your parents grow old. She considers every song like a different mood, or color.

Cam is an outlier in country music. She was born in California and then moved to Nashville. She aspired to be a Supreme Court Justice, studied Psychology at University and worked in labs at Stanford & Berkeley before jacking it in to follow her heart, and taking a sabbatical in Portland to write music. Those months spawned ‘Burning House’ and after that unlikely hit (countless people told her it was too sparse for radio), she found herself on a trajectory she wasn’t yet prepared for. She grew up spending time on her grandparents’ ranch in Southern California, riding horses and listening to Patsy Cline. As she grew up it was strong female voices that drew her in further: The Indigo Girls, Dixie Chicks, Joni Mitchell, St Vincent.

Cam, however, is just a lover of good music, and that’s taken her to collaborations with all sorts, from Diplo to Vince Gill, she’s not bound to one box. The title track of Otherside was written with Tim Bergling, aka Avicii – renowned for his ability to make modern mainstream hits of traditional genres – but finished after he passed away. She recalls how methodical he was. “He cared so much for detail. Now not having him around felt like a lot of pressure to make sure that song was done right,” she says. It’s a country dance song about revenge but it feels like it’s set in outer space. It’s a smash. “Humans are humans and if a good song touches their soul they want to listen to it,” she offers.

Looking to the year ahead, Cam is excited about her dual role as a singer-songwriter and performer, and also as a mother. That might be her biggest current protest. “I get comments like – maybe there are not as many female country artists because women would just rather stay home,” she scoffs. “I want to travel around making the music I love AND be a mother, but the world wasn’t set up for that, I have to build something that works for me and there’s not a lot of examples.” But she’s used to forging her own path by now. There is never a normal to lean on anyway. “You do it your own way and you make sure it’s visible so other people don’t have to feel so alone in it,” she says. Who needs normal when you have Cam?